So, are tattoos vegan? Yes, some are, but generally, tattoos are not vegan. You need to make sure you check first to make sure the tattoo artist uses a reputable vegan ink brand.

Veganism is a lifestyle.

A principle that stands beside the rights of animals.

While the world largely depends on animals and animal by-products, being a vegan must be a full-fledged commitment.

Furthermore, they can’t just go to a tattoo shop and get a vegan tattoo. Being a vegan means taking the narrow alleys of plant-based commodities.

In spite of the availability of vegan products, it is still not something that you can conveniently acquire almost anywhere.

It is because plant-based products require a unique process of thoughtfulness.

Also, specific ingredients are used to make sure that the product is vegan all the way. Hence, vegan products are still limited.

The vegan population is slowly growing. The world is also paving the way for plant-based products to be available on the market.

Thus, it’s no surprise that vegan tattoo inks are now displayed on the top shelves of some tattoo shops.

Not all, but there are a growing group of tattoo shops and artists that have joined or support the vegan way of life.

Let’s dive into the subject further.

Can Vegans Get a Tattoo?

Yes, absolutely! Just because you strictly use and consume plant-based products doesn’t been you can’t get a tattoo. Vegan shampoos, vegan soaps, and even vegan bags have already been invented, so why not vegan tattoo ink?

If you’re a vegan and want a vegan tattoo, say no more. You can go crazy with your tattoo design and colors because vegan tattoo inks come in all the colors of the rainbow.

On top of that, no animals are harmed by producing vegan tattoo inks. It’s even safer than regular inks!

Thus, it is safe to say that vegans can get a tattoo; it is safe and even better for the body than a regular tattoo!

Being skeptical about whether vegan inks are really vegan is pretty much standard.

However, for your peace of mind, there are several indications that will tell you that it is. Want to know if your tattoo ink is vegan?

How to Tell If Tattoo Ink is Vegan?

Firstly, the ingredients make all the difference.

And you may be just taken back anyway.

This is what tattoos are made out of…

What Non-Vegan Tattoo Inks are Made Of?

Apart from the animal byproducts used to enhance the saturation of the ink, manufacturers of non-vegan tattoo inks use toxic chemicals and heavy metal ingredients.

To make sure if the tattoo ink is plant-based, do the research. You can also ask the artist if vegan tattoo inks are available in their shop.

Better yet, you can explore your vegan ink tattoo brand alternatives.

So Are Tattoos Vegan?

Absolutley they are, well they totally can be, if you use vegan tattoo inks.

Here are some of the most popular vegan tattoo inks on the market at the moment. 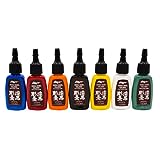 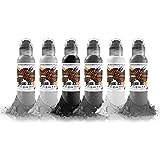 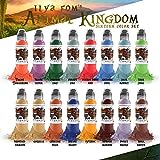 Here are some more vegan tattoo ink brands that are worth looking into:

Start with your vegan tattoo ink to your vegan aftercare products. But what about the transfer paper tattoo artists use before the design is needled onto your skin?

Transfer paper or stencil is what the artist used to transfer the design to your skin. When you get your tattoo, this is the first thing the tattoo artist will do to make sure you are happy with the size, etc.

Transfer paper usually contains lanolin & lanolin is a waxy substance that is acquired from sheep’s wool.

Spirit Transfer Paper is certified vegan. It is skin-safe and can produce a high-quality image.

This brand replaces animal-based wax with vegetable-synthetic blends. Vegan transfer paper is the only alternative if you are going for a vegan tattoo.

They are even safer than non-vegan tattoos, as was mentioned above.

The absence of toxic compounds in vegan inks makes you heal faster. Plant-based tattoo inks are superior in quality.

Despite the lack of scientific research about vegan inks being safer and healthier, just the mere fact that they do not contain harmful elements as regular ink does will give you peace of mind.

It is certain that vegan inks will not damage the skin cells compared to standard inks.

Vegan tattoos do not contain any carcinogenic chemicals that can bring harm to your body. Regardless of whether it is healthier or not, if you are vegan, opting for vegan tattoos is the only way to go.

But first, you need to know what vegan tattoo ink is made of.

What is Vegan Tattoo Ink Made Of?

It contains vegetable glycerin known as

rather than animal glycerin. Glycerin is essential in stabilizing the ink and providing a silky texture.

Moreover, it also contains hamamelis or witch-hazel extract; a compound made entirely from flowering plants.

So how do the different vegan tattoo ink colors actually get their colors?

Although vegan and non-vegan tattoo ink do make not much difference to the human eye when tattoed on your skin, it is still ideal to know the difference between their compositions.

Comparing vegan versus non-vegan tattoos will give you a better insight.

Vegan tattoos are way different from non-vegan tattoos in terms of the process of producing the ink and the ingredients used to produce them.

Vegan tattoos are a hundred percent cruelty-free. From the transfer paper to your aftercare products are animal and vegan-friendly all the way.

On the other hand, standard tattoos contain harmful elements and animal by-products. From the lanolin coming from the sheep to the bone char that creates darker pigments are not vegan.

Rather, non-vegan tattoos aren’t really meticulous about how the ink was produced and what it is made of.

Non-vegan tattoos may not seem too harmful, but it does have compounds that, in the long run might harm your skin.

Thus, whether you are vegan or not, choosing plant-based products for your skin art sounds like a better option. Not only it is safer, but it is also sustainable too!

What’s next after getting a vegan tattoo? Vegan tattoo aftercare will secure the pristine look of your new skin art.

How do I care for my vegan tattoo?

Vegan tattoo consciousness does not stop after getting inked.

The after-care products are equally as important.

If you want to see better results, using vegan aftercare products will enhance your new tattoo. There are several products in the market you can opt for.

A few vegan alternatives are recommended for washing your new tattoo.

Products for caring for vegan tattoos:

Ready to get that tattoo?

You might want to know whether or not your area has a vegan tattoo shop.

If so, you don’t need to worry about having to bring your own supplies!

Vegan Tattoo Shops Around the World

Some notable vegan tattoo shops around the world are:

If none of these shops are near you, perhaps a famous vegan tattoo artist lives locally? Check out Instagram and Facebook to search for local artists.

When diving into the world of vegan tattoos and tattoo artists, there was some tattoo artist that really stood out.

They are all for vegan tattoos and have incredible skills.

It’s a no-brainer. Kat Von D is a celebrity tattoo artist that has been showing up on your noon-time TV. She lives in LA and is a resident artist at High Voltage Tattoo.

Brad Stevens is a New Yorker. His specialties are American traditional tattoos and Japanese tattoos. Brad feels strongly about animal cruelty. Thus his designs exude his love for animals.

Eckel has a private studio in Vancouver, Canada. He is a prominent figure when it comes to vegan tattoos. His works showcase mythic creatures, birds, and wolves.

All of the above artists are super talented and worth following on social, we hope you enjoy it!

So, are tattoos vegan? Yes, they can be; tattoos are slowly becoming a trend. It is an excellent alternative to standard tattoos.

Vegan tattoos are not only cruelty-free and nature-friendly. It is a sustainable alternative. On top of that, vegan tattoo inks look amazing on the skin.

Given all the toxicity that has been slowly destroying our planet, as Earth dwellers, it is our responsibility not to contribute any more damage.

Vegan tattoo inks and other vegan tattoo products are safe and better for the planet and for our bodies.

The idea of having carcinogenic compounds etched in your skin can be scary. Thus, whether you are vegan or not, vegan tattoos should be a consideration.

As an Amazon Associate I earn from qualifying purchases.